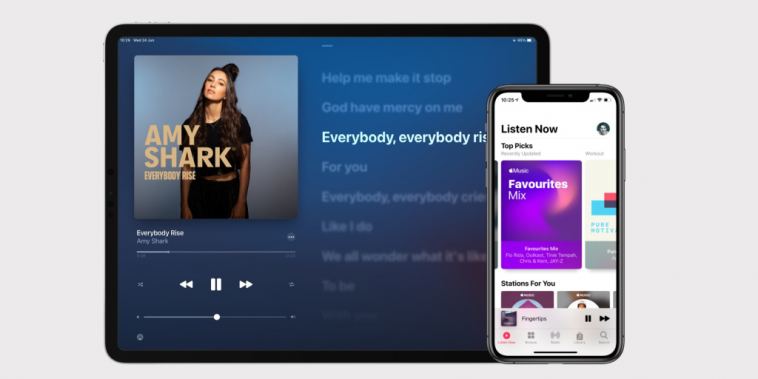 iOS 14 brings major new features like the home screen updates, widgets, new privacy controls, and updates to features like Siri and HomeKit. But Apple has also taken the time to work on some pretty big feature improvements for many of its core apps.

One of these is the Music app. Apple continues to aggressively compete against Spotify in the streaming music race, and iOS 14 takes that one step further. Here’s what’s new in Music for iOS 14.

Firstly, Apple Music supports the new widget features of iOS 14. The Music app provides a Recently Played widget that features recently played albums and playlists. You can tap on the widget to launch the Music app and start playing the displayed music.

Something that is very common on Android is a Now Playing widget, which puts play/pause and next track buttons on your home screen. This kind of widget is not supported by the iOS 14 API though, as widgets are required to launch their parent app when tapped. Developers cannot add independent buttons. It is possible Apple adds a special Now Playing system widget, similar to what is available in Control Center, but that is not present in the current beta.

The Music app is also compatible with the new enhancements to AirPods, including automatic switching and headphone accommodations which can tune sound frequencies to an individual’s hearing ability.

Here are the changes in the Music app itself: 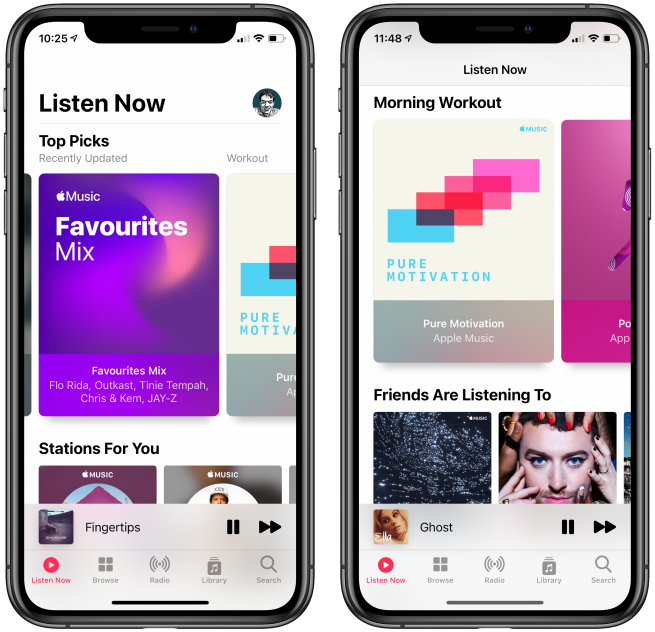 Apple has upgraded the For You tab in iOS 14 and now it comes with a new name: Listen Now.

One of the common criticisms of Apple Music from Spotify users is the playlists and discovery features aren’t as good. Listen Now is seemingly trying to address that angle with an even greater focus on personalization. The tab features Top Picks like your heavy rotation and curated playlists for your mood, followed by Stations For You focusing on artists you follow, and the custom Apple Music mixes like Friends Mix and New Music Mix.

Some sections in Listen Now — like Top Picks — use this new prominent poster art style. It adds some nice visual variety compared to iOS 13’s For You repeating lines of square-shaped albums.

Apple believes Listen Now will be the most popular destination for Apple Music users. As a result, Listen Now sits at the first position in the tab bar, with the Library tab moving to the fourth slot. 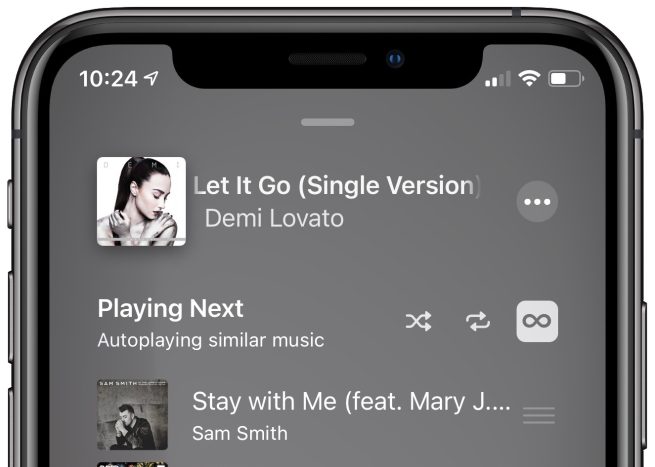 This is definitely a Spotify catch up feature, but much welcomed all the same. The Music app now features a new ∞ button in the queue screen. When enabled, the Apple Music app will exhaust any queued songs, albums, and playlists you have chosen and then continue playing music endlessly. The music is meant to be similar to what you were just listening to. It’s almost like a shortcut to creating a station based on the last song in your playlist.

However, manually setting up a station is a bit annoying and not very easy to find. In contrast, the autoplay mode is front and center in the Apple Music UI, and enabled by default. You may be able to discover a new artist just by the Music app playing it for you. 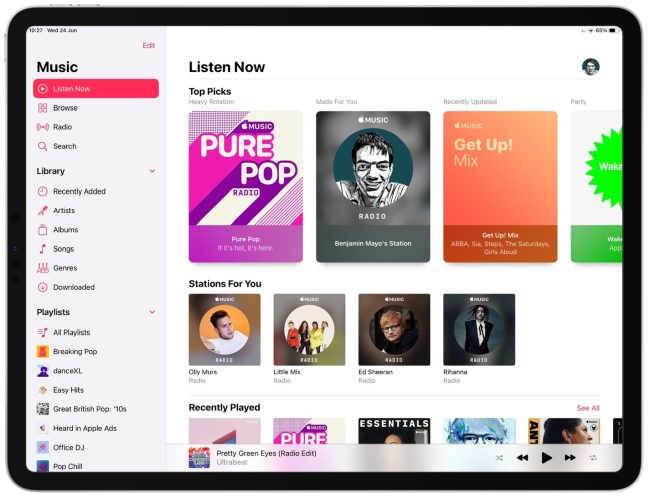 In iPadOS 14, the Music app gains a new sidebar which speeds up navigation. From anywhere in the Music app, you can now quickly jump to your playlists, radio stations, and all the different parts of your personal music library. Sections in the sidebar are collapsible, and you can still edit what sections are visible in the Library group.

The Now Playing experience has also been overhauled with a new design that fills the iPad’s screen. Album art, playback controls and volume take up the left side of the screen, and you can toggle between time-synced lyrics or the Playing Next queue for the right-hand pane. On both iPhone and iPad, the blurry gradient background of Now Playing always reflects the colors found in the album art, with smooth transitions as songs change, which makes the whole thing feel very dynamic. 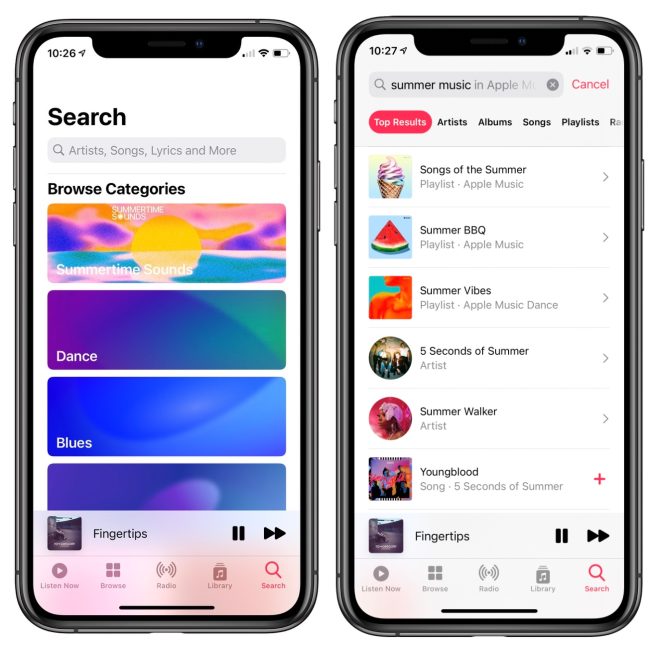 There’s also a redesigned search tab in iOS 14 Music. Popular and timely music categories are surfaced before you even type anything in, if you are looking for inspiration. The autocomplete results are richer and there’s a new look for the search results screen. Any search starts off in ‘Top Results’ which combines songs, artists, playlists, and more into a single list based on relevancy. You can easily filter down using the jump bar below the search field. 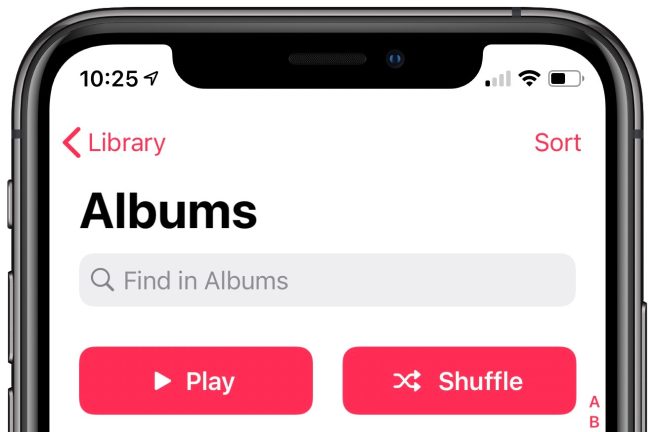 Apple has also made it easier to search your library. In any tab inside Library, you can now swipe down to reveal a contextual search field. This lets you filter based on your current context, to quickly find the artist or album you were looking for.

These new features are available now in the developer beta of iOS 14. Apple will release a public beta of iOS 14 in July, with a public release slated for fall (probably September). 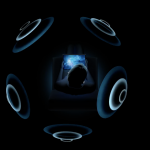 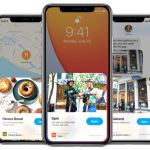