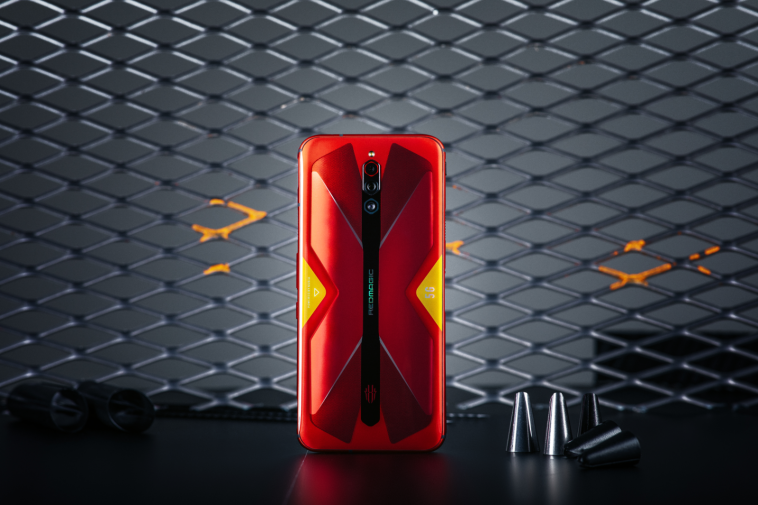 The Nubia RedMagic 5G is a triple-threat device that crams premium power and gaming features into a reasonably priced package. Not only is it the first mass-produced phone equipped with 5G connectivity and a blazing-fast 144Hz display, it has an entire list of flagship specs that are worth far more than its $579 price tag would assert. To help you make the most of this cutting-edge gaming powerhouse, we put together a comprehensive roundup of the best mobile games optimized for the Nubia RedMagic 5G.

Mobile gaming accounts for nearly half of the gaming industry 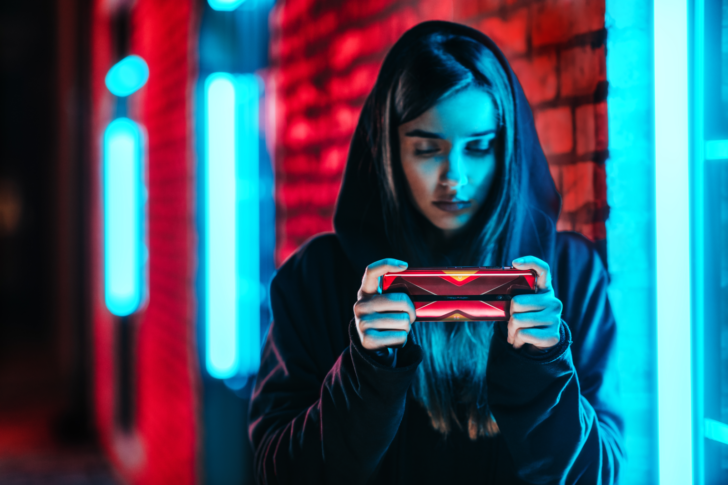 As of 2018, mobile gaming made up almost half of the entire gaming industry, valuing at $63.2 billion. This has spurred OEMs like Nubia to rethink what a phone should be able to achieve, emboldening them to push the boundaries of mobile gaming even further.

With gaming smartphones now leading the charge, it’s up to developers to tune their games to take advantage of the latest hardware innovations. While all of your favorite Android games will soar on the RedMagic 5G, each game on this list has been optimized to leverage the RedMagic 5G’s features. 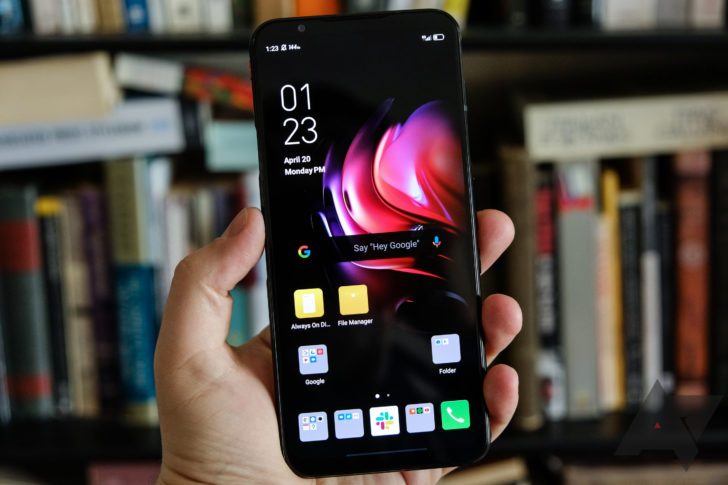 From the moment you power on the RedMagic 5G, you’ll be captivated by its gorgeous 6.65″ AMOLED display with an eye-melting 144Hz mode. Simply put, there is no other mass-produced smartphone on the market with this technology, and it’s truly something you have to see to believe. Here are the top four games that support the RedMagic 5G’s 144Hz display: 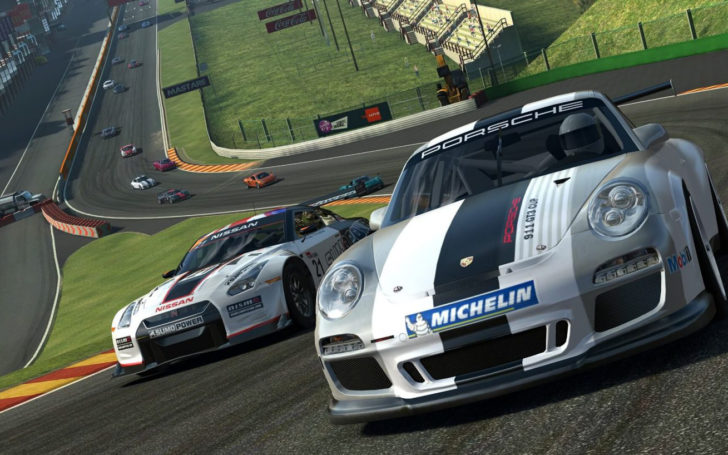 Developed by Electronic Arts, Real Racing 3 lets players conquer 19 real-world tracks while driving more than 250 vehicles from brands like McLaren, Koenigsegg, and Pagani. Burn rubber across 4,000+ different racing events, and even play with your friends in a cross-platform multiplayer mode.

With the RedMagic 5G’s 144Hz display, players can experience high-octane racing in a way that a typical 60Hz mobile display can’t deliver. In Real Racing 3, the lines on the track zip by with fervor as racers accelerate to just under 200mph, allowing players to feel like they are actually in the driver’s seat. 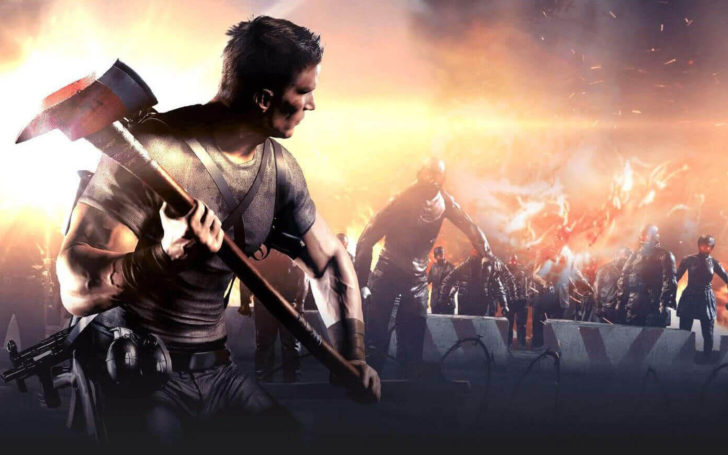 Fight for survival during the zombie apocalypse in this first-person shooter by MADFINGER Games. In Dead Trigger 2, you’ll get to explore 33 battlefields across 10 regions, build your personal hideout, and engage in an intensive storytelling campaign that’s sure to keep you enthralled.

The only thing better than bashing and thrashing through hordes of zombies is watching them burst apart at 144Hz. In Dead Trigger 2, player movements feel particularly smooth, while mowing through targets is just about as satisfying as slicing through hot butter. 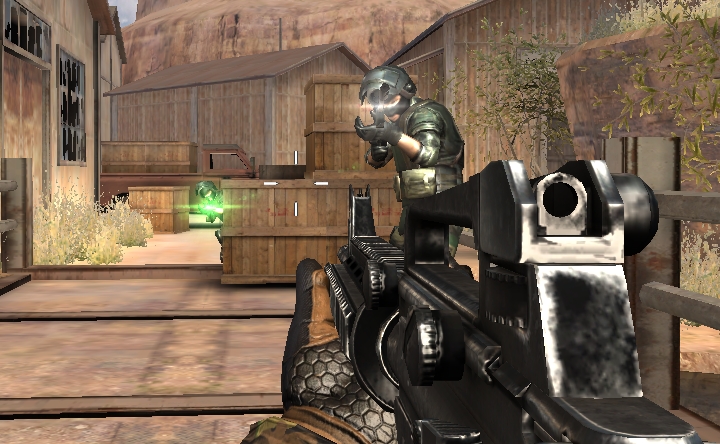 Piggybacking on the popular battle royale trend, Bullet Force by Blayze Games pits 20 players against one another in a fight for dominance. Players can dive into four different game modes — including Team Deathmatch, Conquest, Free-For-All, and Gun Game — while they will need to leverage 20 different weapons, 30 weapon camouflages, and other accessories to survive.

When traversing an enemy-laden map, being able to detect even the smallest amount of movement is key to survival. The RedMagic 5G’s 144Hz display allows Bullet Force players to more clearly see their targets and wipe them away. 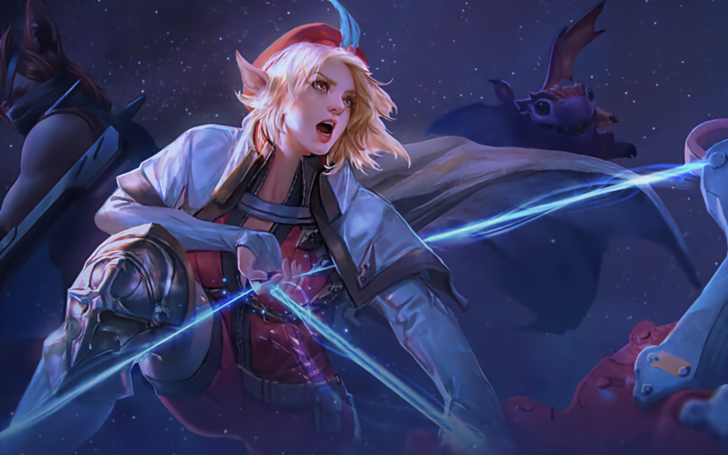 As one of the most successful multiplayer online battle arena (MOBA) games to ever come to mobile platforms, Vainglory by Super Evil Megacorp pits players in strategic PvP battles to take down each other’s turrets and destroy the vain crystal. Choose from 48+ playable heroes with unlockable skins, and activate an expansive cross-platform mode so that you can play with anyone on any platform around the world.

One of the most important aspects of Vainglory is scrolling around the map to check out how your team is progressing. Powered by a 144Hz display, keeping tabs on your towers and teammates has never felt so seamless. 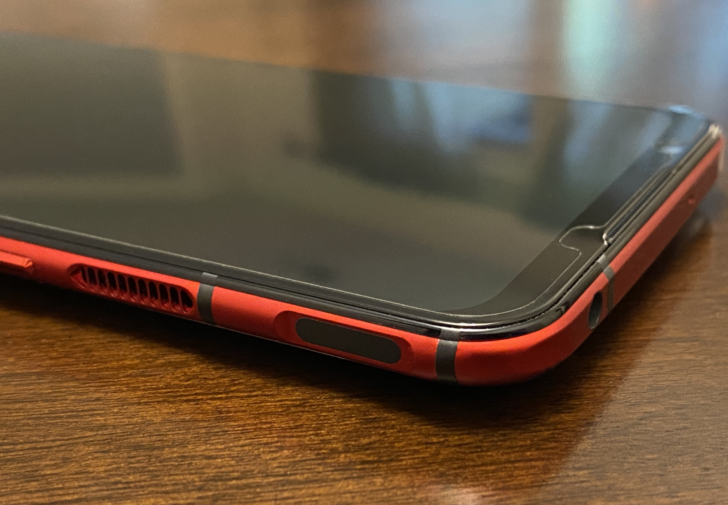 One of the biggest drawbacks of gaming on a smartphone is that controls are usually confined to the touchscreen. To make mobile gaming feel a bit more like playing with a physical controller, the RedMagic 5G is equipped with two capacitive shoulder triggers that can be used to remap onscreen buttons.

With a touch sampling rate of 300Hz (60Hz above the display’s touch sampling rate), these triggers are even more responsive than touchscreen input. The best part is that virtually any mobile game is compatible with this feature! Here are just some of the games that you’ll want to try out with the RedMagic 5G’s shoulder triggers: 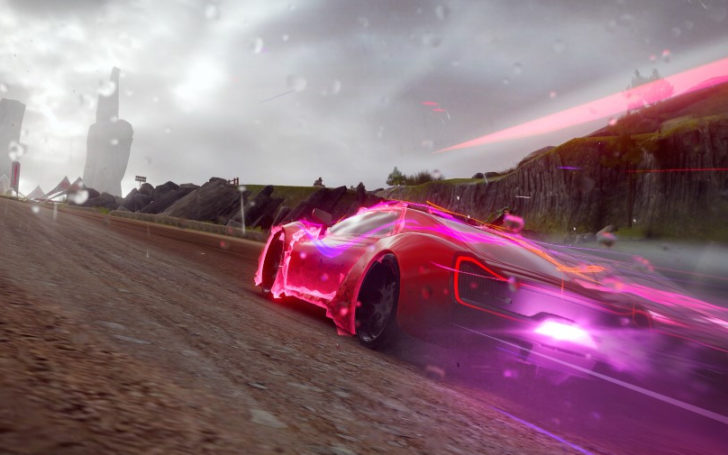 In Asphalt 9: Legends by Gameloft, players get to navigate a series of real-world locations while driving more than 50 different high-performance vehicles. Burn rubber in a progressive career mode, or compete online with 7 other drivers in epic multiplayer scenarios.

The RedMagic 5G’s capacitive triggers work best for Asphalt 9: Legends when they are set to mirror the nitro and drift functions. By designating these buttons to the triggers, players are able to take their hands off the screen and feel more fully immersed in the action. 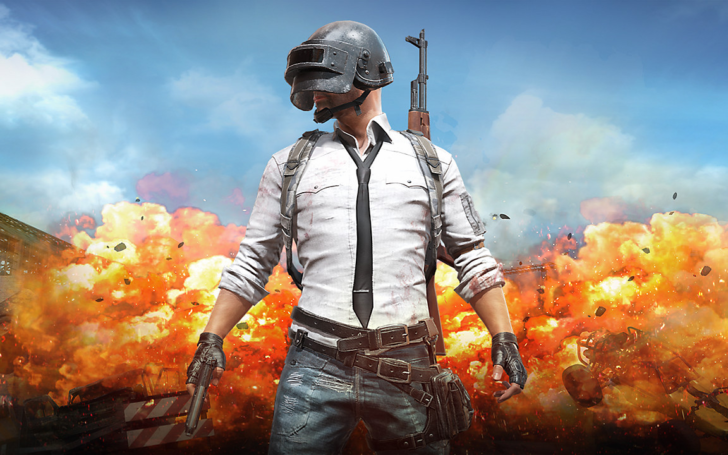 Playerunknown’s Battleground by Tencent, more commonly known as PUBG, is one of the most popular battle royale games on the planet. 100 players are dropped onto a number of world maps where they must gather weapons and fight for survival. Only the last player (or squad) standing will be worthy enough to earn a chicken dinner.

Playerunknown’s Battleground for mobile already does a great job of recreating the full-fledged version for smartphones, but with the RedMagic 5G’s hardware, it can be even better. To mimic a more console-like experience, players will want to map the right trigger to the shooting function, while the left trigger can be mapped to activities such as opening the backpack, crouching, lying down, viewing the map, and more.

As an added bonus, PUBG supports the RedMagic 5G’s 4D Shock, a next-generation vibration technology that allows players to feel when their character has been struck. For an extra advantage on the field, players can even sense when an opponent is approaching through the pulse of their footsteps. 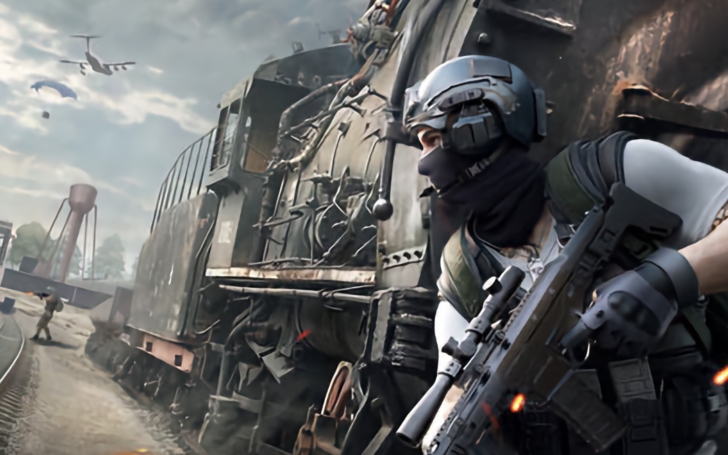 Not to be confused with the recent film of the same title, Knives Out by NetEase Games is a battle royale game that borrows a lot of functional cues from PUBG. You’ll feel right at home as one of 100 players that are dropped onto a map where you must fight to be the last one standing.

Anyone familiar with Playerunknown’s Battlegroundwill feel right at home playing Knives Out. The two are so similar that many of the trigger mapping options will be the same: For best results, set the fire button to the right trigger, and map the backpack, crouching, jumping, or more to the left trigger. 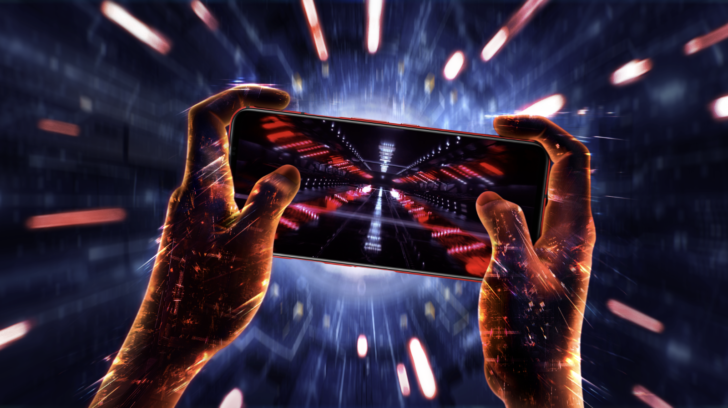 Even when not taking advantage of the RedMagic 5G’s 144Hz display or shoulder triggers, playing games on your mobile device can put significant strain on the hardware. Within minutes of booting up a GPU-heavy game, your device starts to heat up, forcing your phone to throttle performance if heat isn’t dissipated quickly enough. To keep your games running smoothly, the RedMagic 5G is equipped with a 15,000 RPM turbo cooling fan, plus active liquid cooling technology that mitigates heat and ensures a crisp gaming experience.

With Game Space built directly into the RedMagic 5G’s software, players can fine-tune these settings for even better output. Activate the performance and display booster, tweak the flow of the turbo cooling fan, and also automatically record your best game moments.

Level up your gaming experience with RedMagic 5G accessories 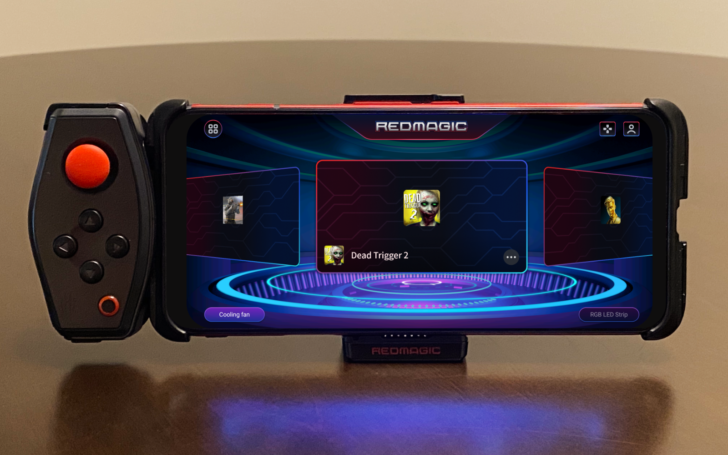 For added performance and precision, RedMagic offers a family of optional gaming accessories.

The Magic Adapter is a dedicated hub that connects to the RedMagic 5G via seven pins along the side of the device. Once docked, players gain instant access to an additional 3.5mm headphone jack, a type-C charging port, and a 100Mb ethernet port for extreme online gaming.

Then there’s the Pro Gaming Kit, which includes a Pro Handle Protective Case that allows players to attach up to two Pro Handles for the ultimate mobile gaming experience. Each handle comes with one precision joystick and 4 mappable buttons. 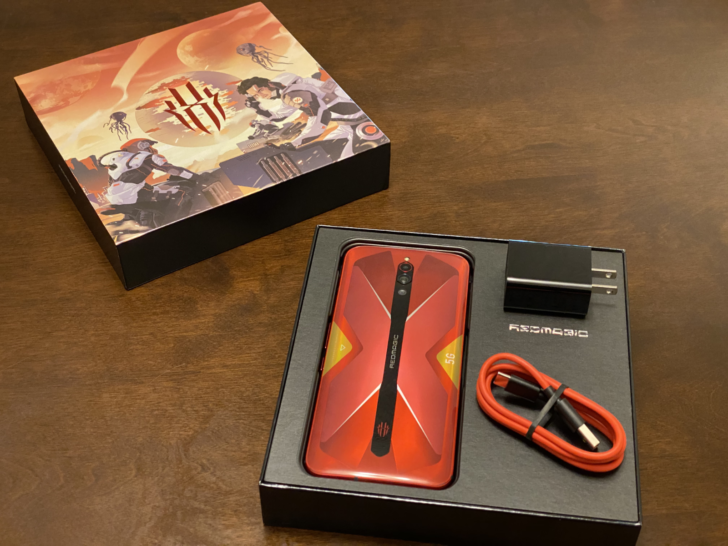 The RedMagic 5G was designed to help mobile gamers and performance enthusiasts get the most out of their smartphones. Although the software experience isn’t always perfect, having access to a Snapdragon 865 processor, 144Hz display, and a suite of gaming features for only $579 makes this device a stand-out contender in the gaming smartphone market.

The RedMagic 5G is widely available for purchase now. It comes in three striking colors, including Eclipse Black, Pulse, and a new Hot Rod Red. Prices start at just $579, though the final cost will vary based on your preferred storage and memory configuration. To place your order, check out Nubia’s official webpage here.

Note: This post is an ad. The content inside does not represent the views or opinions of the Android Police team. Posts like these help fund all the great stuff you see on AP, and you can help support us further by checking out the products or services featured on this page. 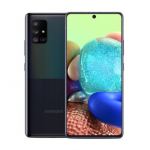 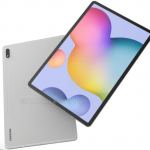