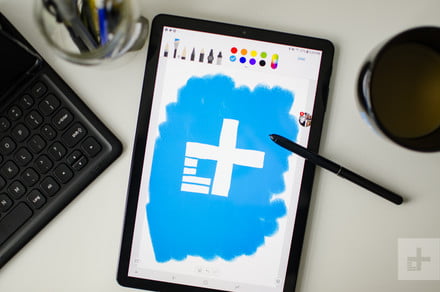 Not long ago, the Apple iPad was really the only tablet worth your time and money. Times have changed: Today’s Android tablets, more specifically the excellent Samsung Galaxy Tab lineup, have really come into their own, offering an excellent mobile experience outside of the iOS (now iPadOS) software ecosystem.

If you’re shopping around for tablet deals and want something that shares app commonality with an Android phone, then you want a Galaxy Tab. The Tab line covers a nice range of prices to fit any budget, too, but to save you even more, we’ve rounded up the best cheap Samsung Galaxy Tab deals you can find online right now along with a run-down of the current models on the market today:

The Galaxy Tab S6 is the best of the Samsung tablet crop — so good , in fact, that it can serve as a 2-in-1 laptop much like the iPad Air and iPad Pro (although you’ll have to buy the keyboard separately to enjoy that functionality, of course). It packs a gorgeous 10.5-inch touch display with a Quad HD resolution of 2,560 x 1,600, and delivers great performance along with a nice all-day battery life. It even comes bundled with the S Pen stylus.

The Samsung Galaxy Tab S6 is the priciest pick of the bunch, but if you’re looking for a premium Android tablet that can potentially replace a laptop (assuming you’re also willing to pay extra for the keyboard), then this is the one you want. Since it’s the most expensive, though, then the Tab S6 does offer perhaps the best chance out of all of these Samsung Galaxy Tab deals to save big bucks — however, Samsung recently released the cheaper Galaxy Tab S6 Lite in the U.S., which features some pared-down hardware and a much smaller price tag. Like the standard Tab S6, the Tab S6 Lite also includes an S-Pen stylus.

If the Galaxy Tab S6 is a little rich for your blood but you don’t want to settle for the cheapest Android tablet around, then the Samsung Galaxy Tab S5e occupies a nice middle ground between “too bare-bones” and “too expensive.” Somewhat confusingly, the S5e is actually a more budget-oriented model than both the S6 and the last-gen S4 despite being newer than the S4 (much like how the Google Pixel 3a is a more budget-friendly revision of the Pixel 3).

That said, it’s still the same size as the Tab S6 with the same lovely 10.5-inch 1600p AMOLED touchscreen, although the Tab S5e naturally features more pared-down specs in contrast to the Tab S6 and S4 — it does not, for example, come with or even support use of the S Pen stylus. The good news is that’s precisely why it’s usually cheaper than both of those (despite being newer than the S4), and the above Galaxy Tab deals may make it an even better value.

The 2018 Galaxy Tab S4 is essentially the last-gen “flagship” model of Samsung’s tablet line, being succeeded by the Tab S6 as the new flagship and the Tab S5e as the budget-friendly flagship alternative. Nonetheless, the Galaxy Tab S4 is still very solid, and the newer releases mean that 2020 is a fine time to score slightly older (but not outdated) hardware like this at a discount.

As with the Tab S6 and S5e, the Galaxy Tab S4 boasts a beautiful 10.5-inch 1600p touch display, and despite being slightly older, it packs more powerful hardware than the Tab S5e (making it perhaps a better choice if performance is your primary concern). The Tab S4 also has a better camera module and battery life than the S5e, and like the S5, it comes with an S Pen. If you want a flagship-tier tablet without paying current-gen prices, then the Tab S4 is arguably the best of the Galaxy Tab deals if you can find one on sale.

The cheapest tablets in the Galaxy Tab line are the A models, not dissimilar to the Galaxy A and J series of cheap smartphones. The Galaxy Tab A 10.1 is the newer 2019 refresh, featuring a 10.1-inch display (as you could probably glean from the name) with a resolution of 1,920 x 1,200, so while it’s not as crisp as the 1600p screen of the flagships, it’s still Full HD and a notch above 1080p.

The hardware and camera modules of the Galaxy Tab A 10.1 are pretty basic as you’d expect from a budget-friendly tablet, but that shouldn’t be too much of a disappointment if your needs are basic, too. It won’t replace your laptop like the Tab S6 can, but if you’re after a seriously cheap Samsung Galaxy Tab deal, the Tab A 10.1 is a very nice pick with plenty of bang for your buck.

The Galaxy Tab A 8.0 represents the least expensive (and the smallest) tablet in the Samsung tablet stable. This 8-inch tablet is perfectly sized for slipping into a bag, although it’s size obviously limits it to strict tablet use — no keyboard add-ons here. Its 1,200 x 800 resolution touch display won’t win any awards, either, but with its compact size and small price tag to match, it’s hard to look this horse in the mouth if your tablet needs are relatively modest.

The Galaxy Tab A 8.0 also syncs effortlessly with Samsung smartphones, so if you already have a Galaxy mobile and are looking for a cheap Android tablet to pair it with, this is a great option. And, since it’s the most affordable of these tablets, you’ll frequently find it among the best Samsung Galaxy Tab deals available.