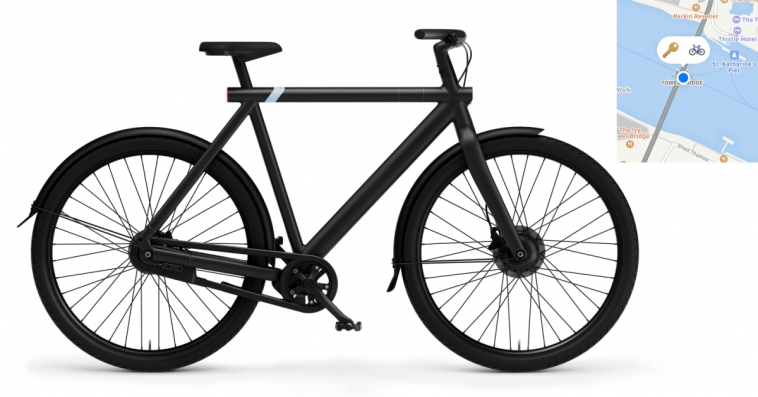 Trying the VanMoof S3 electric bicycle for a couple of weeks gave me the chance to put one of my theories to the test.

Attaching a dedicated tracking device to an item is merely an interim solution. The long-term approach is for companies to embed Find My tech directly into their own products …

VanMoof was one of the very first companies to do this. Their bikes don’t have the U1 chip for precision finding, but that would probably be rather over-the-top for something the size of a bicycle! The feature is really only useful for homing in on the last 15 feet or so, at which distance you can hardly miss your bike.

What we do get is exactly the same Find My functionality as you would for an Apple device like an iPhone or Mac. The location is shown on a map in the app, with the same degree of precision we’re used to – not within inches, but certainly close enough to show a specific building.

If you want to jump straight to the Find My stuff, you can do that via the link below. If you’re also interested in what I think of the bike, read on …

VanMoof is a Dutch company that makes a popular range of electric bikes, with two models in the current lineup. I tested the S3, which is for riders 5’8″ and up.

The base bike has no luggage capacity, but you can add both front and rear carriers. For city use, I’d probably just go with the front carrier: This holds 22 pounds, and can be used with or without the basket section.

For all-round use, I’d add a rear carrier for panniers, but personally I see this primarily as a city bike. If I want to take a bike on holiday, my Brompton is far more practical.

The VanMoof S3 scores top marks for design. As a fan of minimalism, to me it’s an absolutely gorgeous bike! It has incredibly clean lines, with most of the cable runs hidden; front and rear lights embedded into the top tube; the battery cells hidden inside the frame; no gear lever; a discreet embedded display; and charging socket & power button hidden on the underside of the top tube. (The latter is admittedly form over function, as you have to feel for the button.)

The front hub motor, too, is super-compact. Indeed, the display, and the slight motor whine when moving, are pretty much the only things that give it away as an electric bike.

The bike is available in two colors, known only as Dark and Light. I tried the dark one, which is a very dark gray, and looks great. The light one appears a kind of powder blue.

VanMoof bikes are also really impressive on the technological front, with a built-in lock and alarm, as well as the Find My function. Just kick a button near the rear wheel to apply the wheel lock and alarm. If anyone touches the bike, it growls at them, with a louder alarm if they keep moving it. It also sends an alert to your phone. When you return, the bike automatically unlocks as you come into Bluetooth range – or you can configure it in the app to wait until you are closer, or until you press the horn button.

Should the worst happen, the bike can use a combination of GSM and Find My technology to track and report its location. If you choose VanMoof’s optional theft insurance, then the company’s own staff will locate and retrieve the bike for you – and replace it with a new one if they fail.

The electronic gears are configurable. There are Flat and Hilly profiles, which impact the speeds at which the gear changes happen. Living in central London, I had mine set to Flat, and that coped fine with the only steep-ish hill near me (Tower Hill).

Riding the VanMoof S3 is, at first, a somewhat strange experience. The bike has automatic gears, changing through first to fourth gear as your speed increases. I’m not generally a fan of any type of automatic gears (preferring stick-shift cars, for example), and in a non-electric bike I don’t think I’d like this either, as the gearing depends on speed rather than pedal pressure.

However, in an electric bike, once I got used to it, and let the motor do more of the work, I did adapt to it surprisingly quickly. Within the first 20 or so miles, it started to feel perfectly normal. It’s clear that VanMoof has been working on this, as I didn’t experience the same issues 9to5 site owner Seth Weintraub did when he rode an early version in July of last year.

Another thing that takes some getting used to is the Boost button on the right-hand handlebar. This applies maximum power until you release it or hit the speed limiter, and the acceleration of the boost added to even gentle pedaling is absolutely phenomenal! My normal bike is a Brompton, whose small wheels and 14-speed Rohloff gears mean that I’m used to beating most bikes away from the lights (most road bikes then overtake me shortly afterwards, of course), but this thing is a rocket! It’s tremendous fun.

VanMoof tells me I shouldn’t need to use the boost up hills, but I definitely did. No matter how hard I pedalled, maximum assist only kicked in with the boost button. Having to hold this in all the way up is slightly annoying, but it’s in a comfortable position so no big deal.

The top speed of the electric assist depends on the country, as this is laid down in law. In the UK, assistance must cut out at a rather low 15mph, while in the US it does so at a more reasonable 20mph.

The bad news is that this is a very heavy bike, at 42 pounds, so as soon as the motor cuts out, there’s a really dramatic difference in feel! It’s almost like you’re pedaling through treacle. (The weight also really makes itself felt if you have to carry it up any stairs.)

My normal cruising speed on my own (non-electric) bike is around 17-18mph on the flat, and maintaining that speed on the S3 was definitely harder work. However, when I looked at the app for my moving average speed (which factors in slowing for traffic signals and junctions, and accelerating afterwards), it was actually a little higher than on my own bike.

After a while, I learned to just ease off at 15-16mph and satisfy myself with that speed, knowing that my overall average speed would be fine. Although that’s not too much slower than my normal cruising speed, it did feel surprisingly frustrating. But that’s a problem with UK law, not the bike. When I had the opportunity to try it on the US setting (on private land, officer, and using Reddit rather than VanMoof for instructions), it was a delight.

Given the weight of the bike, I chose to ride it on the highest of the assist levels (level 4), which is estimated to reduce the range to 37 miles. That’s more than enough for everyday city riding, and a 20-mile mostly flat ride actually saw me returning home with 67% power remaining.

The bike can be made completely effortless to ride. Set the assist level to 4. Use the boost button to accelerate away from a standstill, and to climb hills. And stick to the maximum assisted power. Under those conditions, you could easily ride from one side of the city to the other without raising a single bead of sweat. That means it could well appeal even to people who would never consider cycling as a means of transport.

Conclusions on the VanMoof S3

I wouldn’t want an electric bike as my only bike. I enjoy propelling myself, and find it a pleasant form of exercise. I also like the simplicity of just hopping on my bike and going, rather than having to think about charging it.

However, I do have to say that this is a fantastic way to get around a city when you want to get somewhere quickly but not arrive sweaty – when going out dancing, for example. If I had enough room in the apartment for a full-size bike, I’d be extremely tempted by this as a second bike. As it is, I’ll already be sad when they come to collect it.

Setting up the Find My feature is also completely effortless. Open the Find My app and press the Items tab. Scroll to the bottom if necessary and tap Add New Item. On the bike, double-press the power button. You then get the Connect button in the app and add it just as you would an AirTag.

That done, the VanMoof S3 appears in the Find My app alongside my Apple devices and AirTags. In the above example, I’m exactly in the center of Tower Bridge, and the app positions the bike (and my AirTagged keys) perfectly.

To me, this adds the final layer of reassurance to the other security features. I’m not sure I’d ever leave the bike unattended for more than a few minutes without physically locking it to something, but this would not only provide a means of recovery if the bike were stolen, but also provide reassurance. I think most cyclists will recognize that occasional slight anxiety about whether your bike is still where you left it. With Find My, you can simply pull out your iPhone and check.

This approach just makes so much sense, and I look forward to the day when all expensive portable electronic items have Find My tech built in. Headphones, cameras, drones… you name it. But for now, a high-tech electric bicycle is a very obvious place to start.

Oh, and by the way, Apple: Find My is a horribly awkward name even before I diarised it. Please rename it to Apple Find. Thank you.

The VanMoof S3 is available from the company’s website, starting at $2,198.

Find My Diary: The VanMoof S3 is a great example of the future of Find My originally appeared on 9to5mac.com 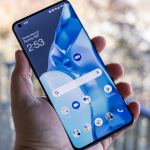 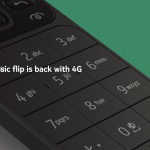